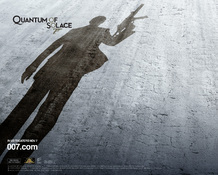 James Bond 007 - Quantum of Solace is a wallpaper that shows the shadow of the most lethal secret agent. The character played by Daniel Craig appears holding a powerful weapon next to the logo of the popular film delivery known as Quantum of Solace.

In this film James Bond is forced to face a dangerous member of a mysterious organization planning to commit misdeeds in Bolivia. The protagonist, Daniel Craig, soon became a true icon of the saga, surpassing even the previous actors who played the role of the secret agent.

James Bond 007 - Quantum of Solace focuses exclusively on the figure of the main character, who is shown in a clear defiant attitude wielding a weapon that is used in the film to liquidate dozens of enemies.